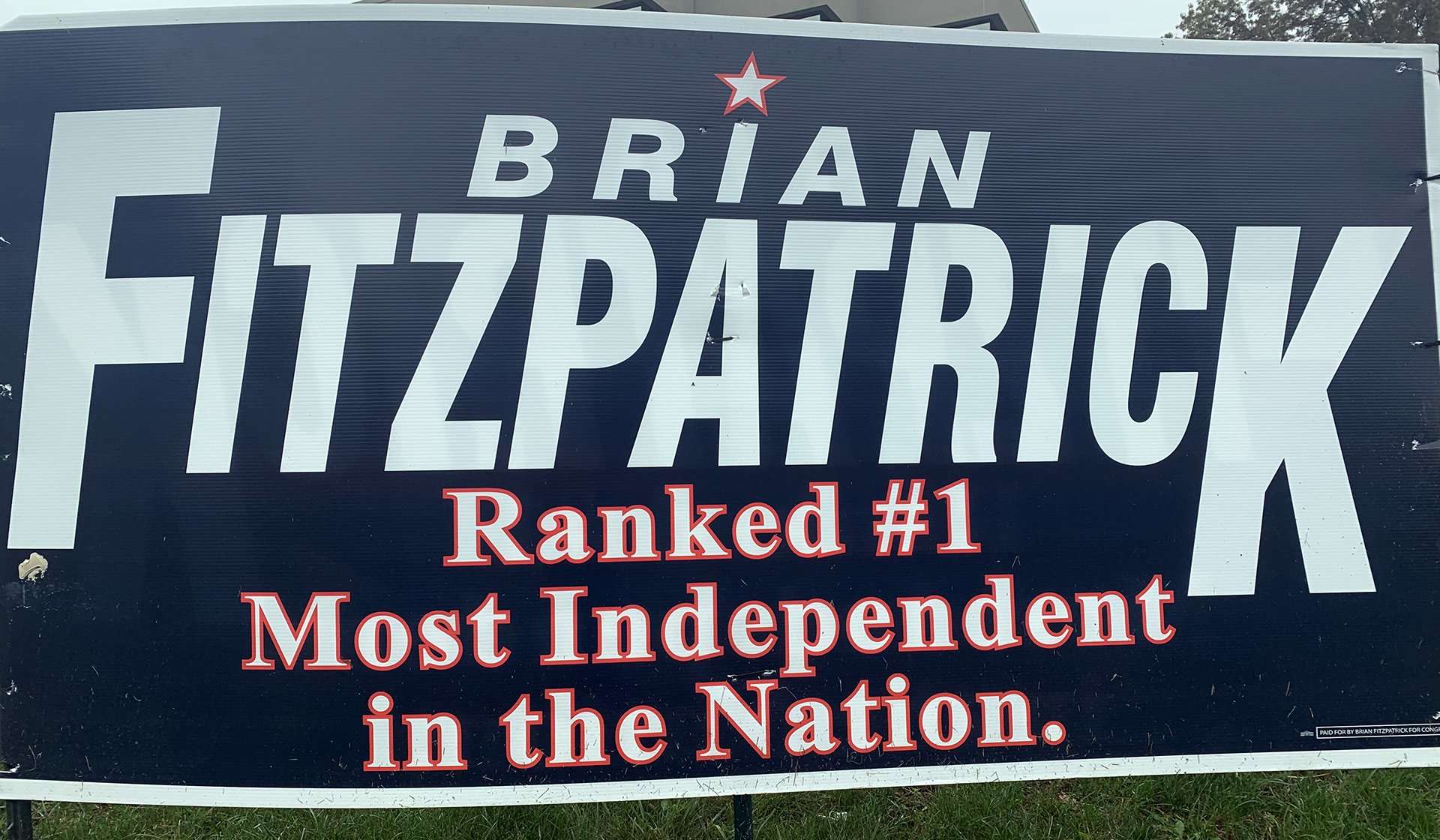 The self-described “most independent congressman of all time”, PA-01 Congressman Brian Fitzpatrick never refers to himself as a “Republican”, though he registers as one and was endorsed by the Bucks County Republican Committee not once but three times. In 2020 his campaign literature and signs declare him “Ranked #1 Most Independent in the Nation”. Fitzpatrick claims the mantle based on the rating he received from the George Washington University Lugar Center. The Lugar Center created an index that measures how often a member of Congress introduces bills that succeed in attracting co-sponsors from members of the other party, and how often they, in turn, co-sponsor a bill introduced from across the aisle. (Source:1)  Fitzpatrick boasts the highest score ever recorded! It’s almost as if the former FBI Inspector Clouseau has cracked the code, figured out the algorithm for votes needed to win this dubious distinction. Fitzpatrick’s voting record places him among the most liberal “republicans” ever in the US Congress. In a debate against Democrat opponent Scott Wallace in the October 2018 general election, Fitzpatrick went so far as to ask Wallace to refrain from throwing labels around we are here to debate the issues in response to Wallace calling him a republican.

So if Brian Fitzpatrick doesn’t want to be “labeled” as a Republican, doesn’t vote like a Republican, and places the word “Independent” prominently on his campaign literature, then why not just make it official and run as an Independent? Surely in our swing district Bucks County, that the indigenous RINO Republicans refer to as a “purple county”, wouldn’t running as an Independent makes more sense than running as the candidate for a party whose base of voters you have no intention of representing? Why would you run under the banner of a party whose values and principles you reject and whose base voters you will betray as you have done for 5 years? Wouldn’t running as an Independent be the right thing to do?

As it turns out, the answer to this question is quite simple and it is NO. Not for Brian Fitzpatrick. Mr. Independent couldn’t even get his name on the ballot if he ran as an Independent. You see, the two establishment political parties in the state of Pennsylvania have rigged the game so that only establishment-backed endorsed candidates can win. Let’s look at the ballot requirements in Pennsylvania for a congressional candidate. These requirements were established by….3…2…1…the two establishment political parties! Imagine that!

In order for your name to appear on the general election ballot for a U.S. House of Representatives seat in the Keystone State, you must qualify by succeeding via one of two separate and disparate paths. The first path, and by far the easiest, is to win a Republican or Democrat Party primary election with the endorsement of the party. These two establishment parties have a status referred to under state law as “qualified” and candidates that run in these parties have ballot requirements that are different from candidates not running as a Republican or Democrat. With this path, the candidate must simply obtain 1000 qualified signatures during the primary petition signing period, which is about three weeks in late January-Mid-February, and his/her name will appear on that party’s primary ballot. In a contested primary the candidate who is “endorsed” by the local establishment party committee wins nearly every time, so it is actually the establishment party committee bosses that effectively SELECT the general election candidate and NOT the voters.

The second path and by far the more difficult and unlikely path to get your name on the general election ballot is the path required for any person not running as an endorsed Republican or Democrat. One would logically assume that since the establishment Republican and Democrat parties are referred to as “qualified”, that any other party is referred to as “unqualified”, right?  For some strange reason, this is not the case and candidates running as anything other than Republican or Democrat are referred to as “unaffiliated”, even though they may be affiliated with a third party such as Libertarian, Green Party…etc. With this path, the candidate is subjected to a HIGHER STANDARD of petition signature requirements. In order to get on the general election ballot as an “unaffiliated” candidate, your petition signature requirement is equal to “2% of the largest entire vote cast for an elected candidate in the last election within the district”. (Source 2) This is a much higher bar to clear than that which the “qualified” candidate must clear.

Let’s take the case of our Most Independent Congressman Brian Fitzpatrick. If Fitzpatrick wanted to run as a candidate for the party he identifies with, as an Independent (unaffiliated), he would have to obtain 4,997 petition signatures (249,804 votes cast for Fitzpatrick on Nov. 3rd, 2020 x 2%) to appear on the next general election congressional ballot in 2022. This is a RIDICULOUS amount of petition signatures to obtain, as you would actually have to get over 6000 signatures to survive the inevitable legal challenge that would be levied by the establishment party lawfare squad.

Without the assistance of the entire Bucks County Republican Committee, Brian Fitzpatrick would be hard-pressed to get even 1000 signatures, much less 6000! So herein lies the secret why Brian Fitzpatrick registers and masquerades as a Republican. HE SIMPLY CAN’T WIN RUNNING AS THE INDEPENDENT HE CLAIMS TO BE. THE TWO ESTABLISHMENT PARTIES HAVE RIGGED THE SYSTEM TO ENSURE THAT ONLY CANDIDATES, RUNNING AS ENDORSED ESTABLISHMENT REPUBLICANS OR DEMOCRATS TO GET ON THE GENERAL ELECTION BALLOT WILL ULTIMATELY WIN. There may be unicorn style exceptions to this rule, but if they indeed exist, they are extremely rare and I challenge you to find a congressional representative from Pennsylvania who was not either a Democrat or Republican and who did not have the endorsement of the establishment party. The same ballot requirement shenanigans apply to the state house and senate seats, where “unaffiliated” candidates need to obtain petition signatures equal to 2% of the last winner’s vote total, a monumental task for most unendorsed candidates.

The simple truth is, by his own actions, words, and votes, that our “independent” congressman is not a Republican at all. Brian Fitzpatrick simply masquerades as a republican so that he can use the party infrastructure and relationships that his brother Mike forged over many years, to benefit himself and advance his own big-government liberal agenda that he cloaks under the guise of “bipartisanship”.

Of course, this leads us to the obvious next question…”Why does the Bucks County Republican Committee endorse a guy that doesn’t call himself a Republican and doesn’t vote like a Republican?” The Cook PVI Index for PA-01 indicates that the “Barney The Purple Dinosaur” excuse for endorsing RINOS in primaries has no standing as it is EVEN. Why does the Bucks GOP Establishment keep telling us that a Republican cannot win a PA-01 election?

The Grassroots Tide is Turning as the Corrosive Culture of the Pat Poprik Party continues to degenerate.